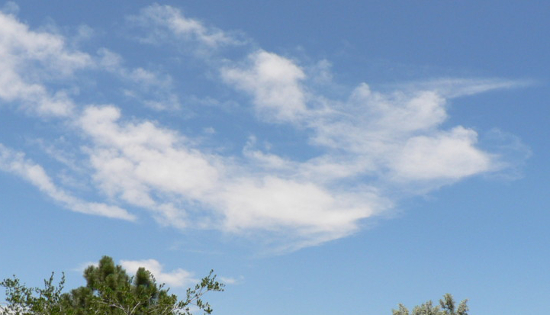 Do the clouds in the picture look like an Angel toÂ you? They appeared that way to me on July 2, 2007, as I satÂ in theÂ shady, cool corner of my gardenÂ toÂ meditate, using the clouds in the sky to focus my mind on the vastnessÂ overhead, in contrast to the coolness of the shadows in which I sat.

Serious problems clung to meÂ at the time, more like mud than shadows. They weighed me down and crusted over my every attempt to feel happy.

Luckily a friend of mine, Linda Van Camp, had told me about Catherine Ponder’s The Dynamic Laws of Healing, in which she talks about special angels. My favorite chapter was, and still is, “How He Dissolved Organizational Inharmony.” It says that peace and progress can be achieved in an organization by calling on the Angel of Divine Love:

One of the ongoing “muddy” problems that gripped me, almost like quicksand, was IRS related. Up until I sawÂ the angel in the sky I had been sinking, fearfully. 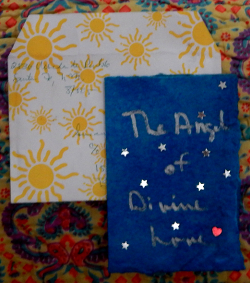 This is despite the fact that in 1999 I carved little Angels of Divine Love out of wax and had them cast in sterling silver to use in Christmas cards. I even made the envelopes, usingÂ craft paper featuring bright yellow suns of various sizes.

The thick, dark blue, handmade paper of the cards had started out a creamy white. I dyed it blue so that the silver magic marker I used, and the little confetti stars and heart would show up as if against a night sky. I loved the idea of the night like sky emerging from the sun bright envelope.

I used a small watercolor brush to paint rectangles ontoÂ translucent, onion skin paperÂ so that I could tear it to make inserts with edges that matched those of the cards. On the insertsÂ I typed or wroteÂ ~Â I forget whichÂ and I’m not sure where to findÂ an exampleÂ ~ myÂ thoughts about the Angel of Divine Love, and… change.

I had in mind graffiti I’d seen written on The Mall, a building just beforeÂ Camden Passage. This is a long time earlier when I lived in London. The scrawled graffitiÂ said:

The English Pound, which is similar to our Dollar, but worth about twice as much, is made up of 100 pence, or “p”.

On the onion skin paper insideÂ my cards I suggestedÂ carrying the little angel in your coin purse so that when you were looking for “change” you’d see it and be reminded of the more significant change you might have on your mind.

Then, behind the insert, was the little sterling Angel of Divine Love that I’d glued inside. 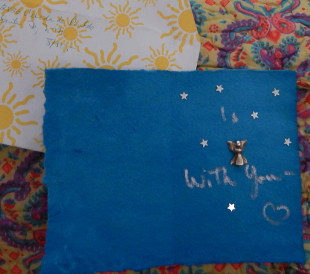 Mostly the postal machines mangled the cards, which was a shame since each one had taken soÂ much time to make and if it had not been mangled would have arrived as lovely as it left my hands.

However, the power of the Angel of Divine Love may not have beenÂ mangled. You see, I received a letter dated December 12,Â 2003, from Peter Sepp, Media Director of Â the National Taxpayers Union in which Peter replied to a letter I’d written to him,

“I can’t disagree withÂ what you wrote about the IRS continuing to cause stress inÂ many peoples’ lives. I must admit too that I am concernedÂ that some of the gains we made against the IRS’sÂ unchecked power in the late 1990s are under threat of reversal.”

In any case, upon seeing the Angel cloud I went from petrified of the IRS and the danger it posed, to a thought limber with the potential associated with the Angle of Divine Love,Â “IRS must be the MOST inharmonious organization, ever.” And with that I beganÂ calling on the Angel of Divine Love, all the whileÂ wondering if there would beÂ positive results.

And, there were positive results, though it took me pretty long to realize that they existed. (That’s another story.)

As an aside, after I did my original page aboutÂ the Angel of Divine Love and the “angel” I saw in the sky, I sent out emails with a link to the page. One response I received said they didn’t see an angel. So, I added an image to show, more or less, what I was seeing. In the image the angel is holding a slender horn. In the angel clouds, I see her holding a bowl which I imagine to hold some sort of offering, and her head is tilted upwards more.

Prior to the Angel Clouds

I was using this necklace sent to me by my cousin Marcie to focus my mind on the Angel of Divine Love while I sat in the cool, shady, quiet corner of my garden. But, on March 27, 2007, a neighbor climbed up a ladder, reached over the fence of my next door neighbor’s yard and cut down the tree boughs that provided the cool shade and quiet. It made me so sad, and it killed some of my shade loving plants that weren’t able to quickly adapt to sunshine pouring in.

I so missed my shady corner.

Then, on July 2, 2007, the clouds looked just like an angel to me, so I took several pictures.

I’m not sure whether the universe gave me an Angel in the sky to make up for the loss of my shady corner where I’d gone to focus on the Angel of Divine Love, or if my mind formed the connection. Either way, Happiness!!! 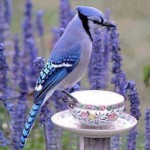 7/27/2014 ~ After I did my page, The Art of Asking, which pictures how fear has affected my decisions in the past and pits that againstÂ my present life in which Wells Fargo may beÂ like a Death Watch Beetle about toÂ destroy my home ~ take it from me in the most insidious way ~ I posted my page on Facebook, asking for suggestions, “What should I do?”

My friend Uta replied thatÂ I should send love to Wells Fargo.

WHAT? Really? hadn’t she read my page? Couldn’t she see that I felt terrified of Wells Fargo because Wells Fargo uses fraud and I have no idea how to combat that when courts tend to support big banks, no matter what.

The Art of Asking ~ Read more.

I told Uta how I felt, thinking that would be the end of it, but I found that I kept thinking about her suggestion.

It took me a day or more, but eventually I remembered the Angel of Divine Love.

I might not be able to genuinely feel love for Wells Fargo, in such a wayÂ that I can “send love to Wells Fargo,” but I can call on the Angel of Divine Love.

I give this burden to the Angel of Divine Love.

The Angel of Divine Love now comes alive in this situation with Wells Fargo and my home,

and in all persons connected with Wells Fargo.

Call on the Angel of Divine Love ~~ see how this works for you.

If you’re facing a lot of stress, focusing on the Angel of Divine Love and giving your stressful burden to the AngelÂ might help. Stress Can Break You ~ Read more.