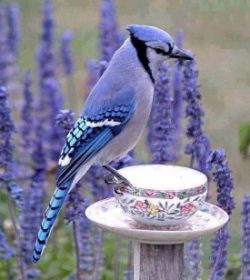 7/14/2014 ~ When I saw this image on FacebookÂ it led me to write, “So beautiful! Such a great help in keeping my mind focused on the present and beauty, rather than Wells Fargo aggression against my home and garden.”

My friend Uta commented, “what an exquisite set.”Â

I replied, drawing on aÂ memory:

“Isn’t it really? Years ago in London I wanted either a rocker or a trunk, I can’t remember which it was that took me to the door of a house that had put one out on the street for pickup by the dust bin men. I wanted to ask if it was really all right if I took it.”

It may have been the trunk that was on the curb (“kerb” in England), because the trunk turned out to have been made by the family of Great Britain’s poet laureate of that time, SirÂ John Betjeman. Which rather matches up with the cup and saucer inÂ the story.

By that I mean that the trunkÂ had a lovely label inside the cover that said it was made by Betjeman and Sons, Pentonville Road… something or the other to that effect. I can’t remember exactly what it said. British History Online ~ Read more.

I remember that the trunk’s label was embellished with a lovely design, which matched with the embellishments of the trunk itself. It was far and away the most lovely trunk I’d ever seen, and back in the United States, my mother and Aunt Bunny were into beautiful trunks.

Inside the trunk there was a dead beetle, however.

Now, my mother had instilled in me the belief that I could cause bad things to happen. For example, if our tv stopped working she would blame me saying it was because I didn’t like tv. That made me a bit wary of not liking things. Though in actual fact I’d liked the tv so much when my father sent it to us that I used to watch Test Pattern with rapt attention, I kept thinking it would be amazing to see the moment it went from a still, motionless image, to being alive withÂ movement.

Which, I suppose, is somewhat similar to my son watching a lot of telly when we lived on Goswell Road. in London. What surprised me was the night Charles Raw was being interviewed on telly news about his book, Slater Walker, which I had typed through the good graces of John Barry who was managing editor of The Sunday Times.

Miguel, my little son, had seen Charles bring pages to me for typing many times. But this was the first time Miguel saw someone he actually knew appear on telly. Miguel asked, “Can Charles see me?”

It seemed to Miguel that if he could see Charles, then possibly Charles could see him, as well.

Similarly, I suppose, I thought that if my mother saw me as the cause of our television ceasing to work, that possibly I actually had something to do with it.

So, the dead beetle in the beautiful trunk brought to my mind the fear that I might cause something bad to happen, even without meaning to, like… what if the dead beetle was a Death Watch Beetle? and what if there were eggs, unseen yet about to hatch, that would inevitably destroy the wood of the home John Hudson had asked me to come and live in with him, and have my son.

You see, theÂ larvaeÂ of death watch beetles (Xestobium rufovillosum) are known to destroyÂ theÂ structural timbers in buildings. John had told me about them sometime before this, saying that they had destroyed parts of cathedralsÂ and that the beetle’s name comes fromÂ the ticking sound it makes. Ticking of aÂ Death Watch BeetleÂ ~ View video.

I thought that for sure, when I thought I heard a ticking, the death of John’s home was imminent. which caused me to get rid of the beautiful trunk just as quickly as I’d gotten it.

Yes, the young woman who had answered the door had said, “Yes. Take it, and do you want to come in for a cup of tea?”

Everyone in England seemed always to offer tea. Such a lovely custom.

The young woman’sÂ tea set was very similar to that in the picture with the blue jay, just totally exquisite. So, the pictureÂ reminds me that asking rather than just taking can lead to beautiful experiences.

Fear, on the other hand, as of death watch beetles, can bring the loveliest of experiences to a screeching halt.

In my present life, Wells Fargo is not like the dead beetle, but more like an actual Death Watch Beetle in that Wells Fargo could easily destroy my home, take it from me in the most insidious way.

By that I mean, in part, that Wells Fargo began foreclosure without serving me. Service is fundamental to Due Process. Had I not found the foreclosure on the internet, my home would have been foreclosed by default, which happened with my condo. The very same judge who foreclosed my condo saying that I was in default for not answering, when in fact I had an answer filed and on the record, Judge Daniel Sanchez, said that it didn’t matter that Wells Fargo didn’t serve me. Understanding the Importance ofÂ Due Process ~ Read more.

With the Art of Asking in mind, I ask you, What canÂ I do about Wells Fargo?

Your Nerves v Wells Fargo ~ Read more. (As an aside, when I was working on this page, adding links and pictures to show Wells Fargo’s ties to the Justice Department, my site was disabled in part, so that I can no longer use the Add Media or link feature in WordPress. Coincidence? I think not.)