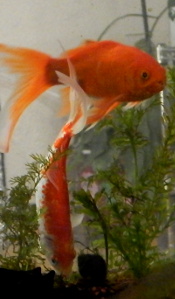 6/16/2015 ~ I’m suddenly confused by my goldfish. Why? Because their filter broke, so I rushed to order a new one from Amazon. Two days for the new one to arrive, but in that short time my female goldfish with swim bladder problems appeared to get better.

At the worst of times she has a hugely hard time swimming horizontally, the way fish are supposed to swim. Also, while she’s engaging in her favorite activity of digging in the gravel she appears to fall asleep as if her brain is deprived of oxygen.

My attempts at a cureÂ include lots of plants, water changes and Stress Coat (which I now know isn’t a good idea because if you use it a lot the aloe in it makes a white, bumpy coating on things like the filter intake tube). So, I switched to SeaChem Prime and SeaChem Stability and change the filter cartridgesÂ every week. Every week they are chock full of stuff.

So you’d think that without the filter my goldfish would have quickly gottenÂ worse. But… no.

MaybeÂ the fact I had a 55/75 gallon filter on myÂ 40 gallon tank created a problem, in conjunction with the plant mats that begin to deteriorate. I love how baby tears mats look, and the goldfish love to dive into them for lunch. So too, Dwarf Pennywort mats. But there’s a point at which coir mat holdingÂ theÂ roots begins to decompose, turning a sort of grey color. Which is probably why the matter in the filters is gray.

Plus, the large filterÂ pump may beÂ so strong that it pulls up gases or whatever that would best be left in the substrate.

I have not put in the new 55/75 filter due to my growing concerns. Yesterday I decided to order a 30 gallon filter. It will arrive tomorrow. I’m keen to see what effect it has.

Or, of course, it’s possible my goldfish got better because algae cleans the water. Without a filter there’s a lot more algae.

2/28/2015 ~ The smaller filter works beautifully. I’ve begun feeding the plants with SeaChem products, primarily Potassium and Flourish Excel which are making the plants grow fast and luxuriantly. But, my female goldfish has continued to get swim bladder problems: Read more.

Since I’ve increase the water hardness, the female goldfish seems to be getting much better.

For some reason, I don’t quite understand what that reason is, the floor of the aquarium has been getting much dirtier. Maybe I used to add more API Stress Zyme than I presently add of SeaChem Stability. Anyway, I’m going to get a new vacuum. The one I have is pretty ineffective, which is what the negative reviews said, and I disregarded when I bought it. 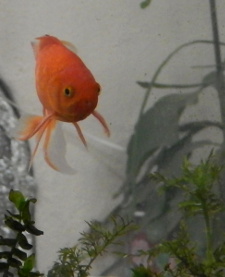 December 13, 2010 – I was so depressed today after dwelling onÂ the fact that the lawyer who foreclosed my condo without sendingÂ me proper documents is now pleading with the bankruptcy court toÂ dismiss my case against him (for violating the automatic stay) withÂ prejudice.

I don’t understand how courts can allow a lawyer like that to keepÂ practicing, and hurting people, and the economy. I just got so SOÂ depressed.

When I happened to look at my goldfish they were nose to glassÂ watching me, as if they could feel my depression and wereÂ concerned about me. Most days they just swim about, investigateÂ the bottom of their aquarium, and uproot plants in their eagerÂ eating of them.

I’m so glad I purchased the more costly glass aquarium, so thatÂ they can see me.

As an aside, the water is really clear and I haven’t changed theÂ Marinland filter since I put it in. I think the Eco-Complete is makingÂ a huge difference.

Note ~ 1/12/2015 ~ I should have changed the filter and water even though they didn’t appear to need it. That’s because 5 years later my female goldfish is having health problems which apparently come from ammonia in the water over a long period. The male doesn’t exhibit the problems. That may be because he behaved so much differently than the female. He swam along the top of the water a lot, which I now understand to have been his way of getting oxygen which wasn’t available in the water due to a build up of ammonia.

2/7/2011 – Last night I was in huge pain due to eating left overÂ beans and rice that apparently had “gone off”. I was up for hoursÂ and every time I looked at my goldfish, there they were with theirÂ little fish noses to the aquarium glass facing my bed. They mustÂ have been able to feel how bad I felt, and they appeared to beÂ concerned about me. It’s not the first time I’ve noticed this behaviorÂ in them. I love them, so much!!!!!

Red Splotches on my Goldfish

Time for a Larger Aquarium