I bought my goldfish in 2001. Recently the male developed a reddish splotch on his back – in theÂ photo you can see it above and to the right of his gill.

In all honesty, I didn’t know he was the male until I got the two goldfish a much larger aquarium and a constant dance of chasing began, Male chasing, female being chased is how it breaks down.

Back to the splotches. I had let their water (I have two goldfish) get veryÂ brackish, that is, distastefully black and cloudy. (There isÂ so much stress with my home being in foreclosure, isÂ how it happened. The stressÂ is horrible and I don’t do thingsÂ for me, my plants or my fishÂ that should be done.)

When I took out the old waterÂ and replaced it with fresh,Â filtered water I saw that thisÂ goldfish, which is a lighter colorÂ overall, had a reddish splotch.

The other goldfish also hadÂ splotches, but not as large orÂ intensely colored in comparisonÂ to her overall coloring.

My first thought was that they were more brightly colored because they were ready to mate, but I worried that wasÂ pollyanna optimism.

Too much food in the water

I Googled “Red splotches on goldfish” and found that itÂ can be caused by too much food making the water’s ammonia content too high.

That certainly could be it, because last fall a woman who was helping me in my house went over to the fish and asked them, “Are you hungry?” She then picked up my food container and fed them.

I didnâ€™t feel comfortable with her doing that, but I found that she made me feel guilty about not feeding my fish enough, so since then I was feeding them a very great deal more.

That was despite Kathy, whom I had worked with at a small hotel, telling me that the main killer of goldfish was overfeeding.

Last night I fed them an amount more like that I used in the past, and I changed the water again today, adding Stress Coat and Stress Zyme.

Dirty Water Over an Extended Period

But, the internet also suggested that it could be from anÂ infection caused by the water having been dirty for anÂ extended period.

So, I took out the plants that were making the mostÂ algae, and I made sure to get out all the dead plantÂ leaves.

Usually the fish huddle together at the bottom after IÂ clean their water, but this time they seemed to beÂ enjoying the fresh water from the get go: they beganÂ swimming around so actively I felt as if they were playing.

However, the red splotches are still there, on each of theÂ two fish, so although I will clean the water againÂ tomorrow, and put in freshÂ Stress Coat, I’mÂ wondering aboutÂ ordering someÂ antibiotic.

(I haven’t driven sinceÂ I got tetanus in 2004Â because of the muscleÂ seizures, and later because of how debilitating tetanusÂ is.) The man I hire to driveÂ me is not usually availableÂ on the weekend, so orderingÂ may be best.

It’s interesting to me that I felt so good about how old my goldfish are, but then I went to a goldfish forum and took major heat about how I didn’t have them in a large enough tank. After that I felt guilty every time I looked at my goldfish, so in a way
that guilt contributed to them getting sick, because I didn’t want to look at them, and without looking at them, you can’t see how they are doing.

First ~~ While it was probably worthwhile to tell me that goldfish need a lot of room, I think making people feel guilty is counterproductive most of the time. For one thing, stress is a primary cause of depletion of vitamin B12. WhenÂ people run low on vitamin B12 they have an increase in pain, a reduction in cognitive function, a loss of balance,Â and many other problems that make it less likely theyÂ will perform well, and more likely they will lose theirÂ temper or on the other hand become extremely depressed.

For these reasons I wondered about an antibiotic that also contains B vitamins.

Second ~ While I had tetanus I had fine red lines under my fingernails and thick red lines under the toenail of the toe I had injured. Lines like that are called “splinter hemorrhages” and are associated with a blood infection. 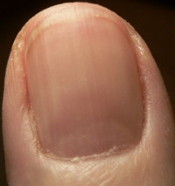 A few years later I was getting dull red splotches under my nails due to an ongoing infection that I keep in check by usingÂ vitamin C.

In the picture youÂ can see the splotch just aboveÂ the white moon. Basically, itÂ seems very similar to theÂ splotches the goldfish hadÂ when they were affected by anÂ infection. (When I forget toÂ take vitamin C, or when thereÂ is a lot of stress, the splotchesÂ I have, like that pictured above,Â overpower the moon on myÂ thumbs.)

All of this givesÂ the impression that livingÂ organisms share in how illÂ health affects them… that’s you and me, fish, animals and mostÂ likely insects.

Foxtail OUT ~ Stress Coat IN

I hope to be able to report that my goldfish are healthy again in the very near future. 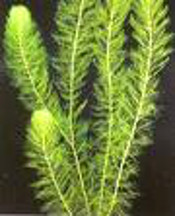 This is a picture of Foxtail, one of the plants that makes a lot of algae. It is a coarser plant than Limnophila, but overall I have a hard time telling them apart. This is the one, I think, that was in with my fish when they got sick.

This is a picture of Limnophila.

My fish didn’t appear to dislike it as much as they disliked the Foxtail. But, it was quite invasive and also made a lot of algae.

My goldfish each have far less of a red splotch today, so the Stress Coat alone must be working. (I put off ordering the antibiotic in case Del could give me a ride tomorrow.)

Time for a Larger Aquarium