Years ago I was in Harrods, I can’t imagine why, since I could not afford to shop there. Perhaps I was looking. Most likely.

In any case, I was on a staircase when I saw a woman in a loose fitting dress, a rather shapeless dress but bright. The woman’sÂ shape was roundly visible within the dress, suggesting the far end of the spectrum from thin. She did not look obese, just to be clear.

I remember how happy she looked, how lively and how, “places to go, people to see.”

She could easily have been on a holy card, if theyÂ made modern ones. Do you know holy cards? When I was a child there were holy cards not just for Jesus and Mary, but for angels and myriad saints. I had a holy card collection. I liked the art and the little stories on the back of each card. My collection grew exponentially when I was about to leave hospital at one point ~ I was sick a lot of my childhood. 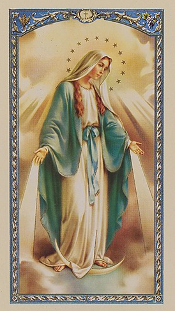 The sister who was seeing to my release offered me a whole cellophane wrapped pack of holy cards, easily two inches in height. I said, “No.” She offered again. I said, “No, I couldn’t.” Luckily she offered again, because I’d been taught never to accept anything that wasn’t offered three times.

My point, is that the Harrods woman could well have been my inspiration in times when none of the canonized saints were appropriate to the challenges I was facing.

One ongoing challenge of that nature was deciding whether to buy, or not.

I’d grown up rather impoverished, I could buy things with my babysitting money, but asking for a new dress was out of the question. As a result I often chose my poverty reality rather than a happier alternative.

For instance, I would see a wonderful, happy looking dress that I had the money for, but decide I should save my money.

You would think I would have learned the quintessential lesson in this area when I was hitchhiking with Jay, after I’d graduated from university with an incomplete in philosophy. 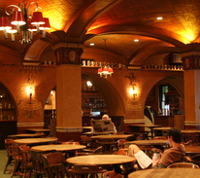 I’d been reading Wittgenstein’s Blue and Brown BooksÂ in the Rathskeller in Madison, at Wisconsin University, when I overheard a fellow at a nearby table say he’d once hitchhiked with 30 record albums.

Really? I thought. That was pretty heavy. I looked over to see what that kind of fellow looked like, one who would carry such a heavy weight of music with him. He was straggly bearded with sandals.

My initial thought was, I can handle him. I mean, he didn’t look at if he’d be dangerous. My simultaneous thought was that I could ask him to go hitch hiking with me. I felt he’d be someone safe to hitch hike with.

So, when his friend went to get them more beer, I went over and said I’d overheard him talking about hitchhiking, and did he want to hitch hike to California with me.

I could just about hear him thinking, “This girl has just walked up and asked me to hitchhike with her.” Over a quarter of an hour or more he talked himself into, and out of, hitchhiking with me. His friend had returned with the beer, which they drank.

Finally he said, “Yes.” We decided to meet next morning at Skaggs drug store at some time, I forget the time.

After an initial glitch, in that there were two Skaggs and each of us went to the opposite one, till me met up after Jay snapped to the problem and found me.

We took a bus to the outskirts of town. Jay told me how he was in theater and played all these different roles. I instantly recognized that he was very bright and that if I’d thought his scraggly beard indicated he was less than brilliant, I had misread him.

We set off with considerable success at getting rides, till there was a bit of a stall. We were at a freeway rest stop, I forget what chain handled the restaurant. Jay was saying we were stranded, I said no, that we weren’t stranded, it was just a pause in our travels.

Jay suggested we get ice cream cones. They were ten cents, that’s how long ago this was. I said we had only twenty cents left, so we shouldn’t spend it.

Jay asked what good it was going to be to save a dime. “What if we need to make a phone call?” I asked.

Jay bought his ice cream cone while I thought about how good the pistachio I wanted would have tasted.

Unexpectedly, just when Jay was having some of his chocolate, I smashed, somewhat, his ice cream cone into his face, his nose primarily. He laughed, he was that kind of guy.

I, however, suddenly felt apprehensive. How was he going to get me back?

I don’t remember him ever doing anything to retaliate. He was, as I said, very bright, so I think he saw his revenge coming into being without him lifting a finger, since I was suddenly totally jumpy.

We never needed a dime for the phone. We were given a lift shortly after Jay’s ice cream cone.

So, you’d think I’d have taken away the “spending to enjoy” lesson. I could, after all, have come away with the attitude of the woman on the stairs in Harrods. Sadly I chose attachment to a dime.