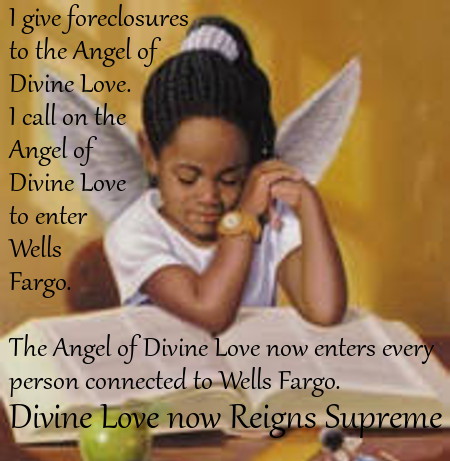 10/3/2018 ~ Foreclosure Awareness New Day 14 features a studying angel because I heard a very sad story the day before yesterday. A woman was tweeting about how a bank servicer took her home using fraud. She recognized the fraud, so she tried to fight it. She went to downtown Phoenix, went into the prominent courthouse there, and filed what she thought would establish her fight against the servicer’s wrong doing, and save her home.

She had no concept of the various court rules that apply, however. So, while she thought the Court was deciding on her case, her case was in fact condemned to utter obscurity because it didn’t fit into the highly structured rules. Eventually it was decided against her because she hadn’t used the right words to establish her complaint. It was also possible she hadn’t gone to the right courthouse when she choseÂ the highly visible federal courthouse when it may have been she should have filed in a state district court.

I began my legal fights much as she did: In the exact wrong way.

I had no idea how to do things in court when an employer refused to pay me thousands of dollars in commissions I had earned. I took my papers to the court and filed. A year or so later my case and a slew of other cases like it, were thrown out, the papers we filedÂ were thrown into the trash at the same time.

It took me a long time to learn some of the “acceptable” words to use in addressing problemsÂ I wanted to bring before a court. Almost none of the words that sprang to mind, for me, were on the acceptable list. Even when I knew about the “acceptable words” I had a hard time changing the words that came to mind to the ones that lawyers used and courts found acceptable. I spent hours going through COA books, Causes of Action. Causes of action are acceptable things to complain about.

Since it’s next to impossible to find competent, honest legal help in fighting a foreclosure, it’s important for people who are in or facing an upcoming foreclosure to know some of the basics of representing yourself in court.

The very first thing you need to do, is read the rules. TheÂ rules are in books at your nearest law library, but they are also available on line. Read them. They aren’t entertaining, but they are essential.

Good Luck! Seriously. The more we know, the more likely we are to beat bad banks and servicers.

9 Steps to Representing Yourself

Art Credit: I found the above art on a page that gave no credit to the artist. If you know who created the art, please let me know.