January 29, 2010, my goldfish bowl has been needing cleaning and new water more frequently than every week, so I’m looking at bigger “habitats” for my goldfish. I’m sure the bowlÂ they are in is less than 2 gallons.

January 30, 2010, In the last day I’ve read a lot of aquarium specifications and reviews at PetCo, PetSmart, Wal*Mart and Drs. Foster and Smith, and I am coming out of my confusion over acrylic versus glass.

For myself, I think I’ve gone from being drawn to the 5 gallon acrylic with excellent reviews at Wal*Mart to the 12 gallon Eclipse 12 by Marineland at Dr. Foster and Smith.

In any case, in preparation I’ve painted a sturdy, solid wood table to use as a stand. 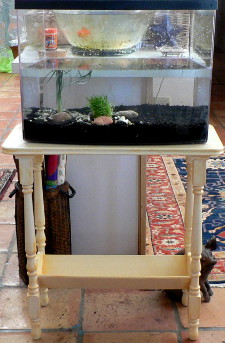 February 6, 2010 -Â I’m not sure theÂ table is as sturdyÂ as I thought. But, IÂ think it’s up to theÂ job. (You canÂ barely see theÂ antiquing I did onÂ it. Very subtle.)

My goldfish are inÂ their old bowl onÂ my desk. They’veÂ been watching meÂ prepare their newÂ Eclipse 12 home.

When I was puttingÂ in steaming waterÂ so my hands wouldÂ stay warmer whileÂ I was planting, theÂ fish actually lookedÂ worried and beganÂ huddling together. I wonder if fish have a genetic memory of steaming water being a bad sign for fish in terms of longevity vs. dinner for humans.

The black material at the bottom of the aquarium is Eco-Complete Planted Aquarium Substrate. It’s really heavy. (20 lb. of the substrate felt a LOT heavier than 20 lb. of flour. That’s a joke…)

I’m hoping that my plants thrive. Usually theyÂ last a few months then sort of peter out.

As deeply as I could, I planted each of the three different kinds of plants that I purchased, andÂ the wisps of plant that had survived in the goldfish bowl. Then, I placed aquarium gravel around the bases of the plants to help keep them secure.

Later –Â With sunÂ shining on theÂ micro swordÂ grass at the frontÂ it’s sending up aÂ stream of tiny airÂ bubbles. In theÂ closeup I tookÂ you can see them,Â but I’m going forÂ a sort of uniformÂ look to myÂ pictures here.

Time to go checkÂ the MopaniÂ driftwood to see ifÂ it’s releasing fewerÂ tannins. Hope so!Â I’d really like toÂ place it in theÂ aquarium so I canÂ put plants behind it and then put the filter in place. 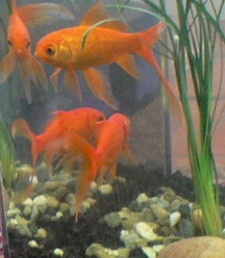 February 7, 2010 – Acrylic vs. Glass — Oh Oh! my goldfish don’t appear to be able to see out of the acrylic tank. They see their reflections in the sides which are like mirrors. I’m SOÂ disappointed. Back to looking at aquariums, and this time glass is a must. (Though I have an email in to Marineland.)

Later – Well, I’m no longer as sad as I was. The fact is I have to make a decision: do I want my fish to no longer see me? or, do I want to buy a new, glass tank, and go through all the trouble of setting it up? do I want to get a larger tank while I’mÂ at it, since the cost is minimally more? do I want to purchase a wheeled cart for my aquarium stand so that I can put the water I filtered for the Eclipse into the new tank? (and then move it into place when the Eclipse is empty-ish) do I have another $100 to spend? … or … do I want my fish to not see me anymore??? (I used to love seeing their little fish faces looking out of the tank at me.)

Later still – Then, there’s the problem of how much I like the present table, that I antiqued. It’s pretty, and I love it. But I’m not sure it’s strong enough to hold a larger tank.

If I get the steel and chrome cart with wheels, that’s strong enough, my living room is going to be dominated by chrome, given that my plant racks are chrome.

February 9, 2010 – I’ve decided to get the 16 gallon glass tank with hood from PetSmart. It isn’t that much heavier than my 12 gallon tank. A gallon of water weighs 8.43 lb. I’m now sanding an old bread board I used to use as a drawing desk. It has ink stains, numerous cuts from my craft knife, and glue streaks… so sanding is not going very quickly. I may opt for the “distressed” look and polyurethane it with less than perfect sanding results. Time is a factor because I have to send back the Eclipse 12, and before I do that I have to get my substrate out of the bottom and into a new glass aquarium. Meaning the board has to be in place before I get started with the transfer.

February 13, 2010 – I am so happy with the Aqueon glass aquarium. I’m delighted to see my two fish, as opposed to seeing them and a half dozen reflections of them. 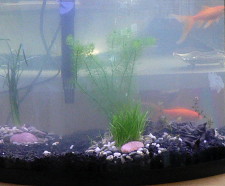 Because the MarinelandÂ Bio-Wheel filtrationÂ was broken on theÂ Eclipse 12, the water isÂ somewhat cloudy. I’mÂ hoping that clears up. IÂ bought a 30 gallonÂ system, almost twice asÂ big as I need, in theÂ hope that the addedÂ water processing will make up for the hours the system is turned off each night. I can filter the water only when there’sÂ sunlight for my solar electric system. 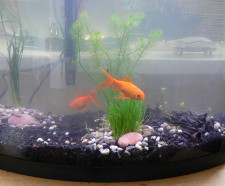 February 14, 2010 – the water is more “foggy” than cloudy today, but, it’s notÂ clear. I hope that theÂ improvement tomorrowÂ is equally great. Then,Â in a few more days theÂ water should be lovelyÂ clear. Hopefully.

Other than that, I’m noÂ longer quite as happyÂ with the Aqueon aquarium: theÂ light appears to be something other than full spectrum.

February 19, 2010 – Aqueon tech support has been wonderful and explained to me that the lights are 8000 Kelvin, which is the spectrum for “daylight”.

Time for another New Aquarium

4/1/2012 – It’s time for a new, larger aquarium for my goldfish, which grew proportionally to the additional space they had in their previously new tank, shown above. The Aqueon Planted Aquarium is 9 gallons bigger and has a much more lovely hood. The light is meant for growing plants.

It turns out I didn’t plant the plants correctly last time, so they didn’t spread the way I had hoped. On the other hand, there was masses of algae which spread “gloriously”. It isn’t particularly helpful to leave some algae to deter algae growth, and not turning on the lights hurts the plants more than it deters algae.

This time I got a rolling cart, and it’s dynamite. Also, this time IÂ watched videos on planting an aquarium. The one by a man fromÂ Tropica was very helpful.

Many of the plants I bought from AquariumPlants.com were not in good shape upon arrival. The Anacharis was a pretty reddish
color, which turned out to mean it was dying. One of two micro sword grass was lovely but the other had only a tiny amount of
grass, maybe about the size of a dime. The dwarf hairgrass was brown and slimy, both top and bottom. I tried to salvage the middle,Â which I hoped would grow. Some did. And, I didn’t cut off enough ofÂ the Mermaid Weed stem bottoms for the roots to grow into the substrate. Instead the roots were hanging off the stems. When I pulled the plants up for replanting, I discovered that their bottoms were rotting.

I called AquariumPlants because they advertise that they have great customer service, only that turned out not to be true. They said they’d be glad to refund my money for the plantsÂ that died if I sent them pictures I’d taken when the plants arrived. LOL! I hadn’t thought I needed pictures and they hadn’t said I would. So, be warned.

How I’m Planting This Time

I put the EcoComplete in and just barely covered it with filtered water, so that the nutrients wouldn’t cling to the glass and invite algae. That worked really well.

Also, I planted the aquarium then waited three weeks to put the goldfish in so that the plants could root. During that time I had the aquarium only half full because Aqueon tech support said that it was alright to move the aquarium on the rolling cart as long as I didn’t create a huge wave when going over the edge of a rug or anything. A huge wave could damage the corner seals. It seemed to me that less water was one way to control the size of the wave, since indeed I had to move the tank over the edge of a carpet.

With the aquarium only half full I couldn’t run the filter so by week three there was hair algae ~ not so pretty. On the other hand, there was a LOT less algae than I’d gotten in the previous tank, and that may well have to do with the CO2 I provided for the plants via Seachem’s Flourish Excel. The reviews for it said it deterred and even killed algae.

Flourish seems to have madeÂ my trapdoor snails ill. They can’t cling to the side of the aquarium anymore. Their “feet” are a pale color. They all died, which made me feel really bad about how they may have been in pain.

I called Aqueon to ask if the filter, now that it was running, would pull the algae off the plants. The tech said… “No.” He helpfully suggested Japanese Trap Door Snails to eat the algae… so I ordered some, and WOW, do they ever do a lovely job!!!!! 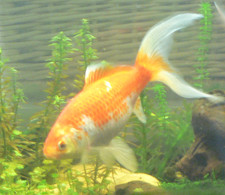 I don’t think they have as much room in their large aquarium as they did in their punch bowl when they were tiny. So, a new, larger aquarium is probably going to happen… only after the next size up IÂ don’t have a large enough place to go larger still.

Red splotches on my goldfish