1/29/2018 ~ I have been having a lot of depression and major stress over four things: Wells Fargo’s foreclosure judgment, which I am appealing, my credit card which had to be shut down because of “suspicious activity”, my solar electric batteries which wore out before their time due to me trusting my TriMetric meter, and Mice.

The stress caged me so completely that I began having nosebleeds so bad I couldn’t do anything because the bloodÂ kept getting all over. One night I was woken by a nose bleed and had to sit in the dark hoping I had enough tissues to hand to keep the blood from getting on my new linens.

When I looked at my face, as I was getting ready for a friend to pick me up to go to Hobby Lobby to buy wax… I was so stressed that I had ordered the wrong kind of wax, and without the right kind my candle heating would be a flop and I’d be cold… I saw that my lower lip had sort of merged with my chin skin.

I say, “owed” because having begun my appeal I found he submitted a finding of fact, after the trial, that referred to the mortgage, when he should have written promissory note, or original note. The mortgage has no effect in a foreclosure, the key is the original note with your/my original signature. That is a negotiable instrument and falls under the UCC when it comes to foreclosures. Sigh.

Now, to the nitty gritty

I used the Vitamin Collagen Essence Mask, with a picture of an orange, on the first day. It was a little harder to unfold and smooth onto my face than characters in South Korean telly series make it look. I kept smoothing it out around the edges and over the most wrinkled parts of my face, like the creases between my eyes and over my nose. And, when the 20 minutes was up I “pealed” it from my face, folded it in half and put it on one of my legs.

I inspected my face, critical of the promised features,

1. …simple sheet type essence mask offering your skin direct nutrition. 2. You can feel the difference immediately when using the face mask only once… 3. It contains Stabled Vitamin C thus it keeps your skin clean and bright and makes your tired skin from daily life always healthy and clean. 4. Vitamin E and Collagen: It provides nutrition and make your skin healthy and bright. 5. It makes you feel cool and it keep your tired skin elastic.

There was a significant reduction in the furrows on my forehead. I wrote that off, however,Â based on the factÂ the mask had a kind of ironing effect during the time it was plastered on my face. The vertical creases between my eyebrows were unchanged, but that was probably due to the fact the mask was pulled tight toward the outside edges of my face, which made it rise away from the creases.

What was astonishing was that my leg where I’d put the folded mask, after using it for 20 minutes on my face, was super smooth, shiny smooth. There was no arguing with that.

1/31/2018 ~ Today I used Snail for “Regeneration, Moisturizing and Nutrition”. It differed from the Vitamin Mask in one respect:

3. Its chondroitin sulphuric acid of Snail Secretion Extract is effective for regenerating skin cells and it makes your troubled skin elastic, smooth while working together with collagen and elastin insideÂ of skin.

There’s no question but that my skin is improved. What I find hardest is taking the time to take care of myself.

2/2/2018 ~ I went with the Q10 Collagen Essence Mask today, for Firming, Regeneration and Moisturizing. It’s distinction is:

3. It contains Coenzyme Q10 which is effective for keeping skin anti wrinkle and keeping skin from aging. It makes you feel that your skin becomes much elastic and younger. 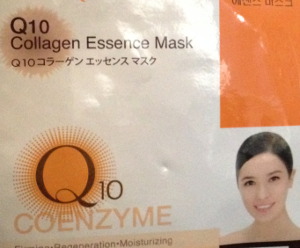 It didn’t take any courage at all to use the Q10 mask, as opposed to the Snail Secretion mask… LOL.