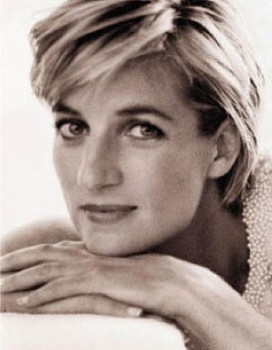 9/26/2016 ~ After IRS put me out of business enforcing for 1984, which I had paid in 1985, I wrote about a thousand letters, literally, trying to bring about reform of the IRS. It was shocking to me that IRS did not reverse its course even after I sent proof, over and over again, that I’d filed and paid my 1984 taxes in 1985. Read more.

I did not write as much creatively at that time, but I had my novel and I wrote to Princess Diana about that, talking about my experience as I wrote.

At the time I received a response to about 3 letters of every hundred I sent out Usually a response came in three or so months if I had written to someone well known. I completed my letter to Princess Diana on December 27, 1996 and posted it. Princess Diana’s letter in reply is dated January 8, 1997.

This is the most bold, and yet humble, letter I have ever attempted to write. And from the very start I can see it won’t be easy: I’m not even sure of the proper form of address.

Background: I was living in London when you married; I saw the fireworks in the sky as well as on telly. From the perspective of my life falling apart, in the most horrible way, I watched the whole of your wedding celebration seeing mostly how perfect you were, believing you were going to have a rather perfect marriage.

What had affected my life, were my father’s consistent desertion, until when I was eleven he left and didn’t come back, my subsequent decision never to marry, my desire to have a child, my pregnancy, and my acceptance of an Englishman’s invitation to come to him in London to have my child.

The Englishman, whom I’d met when he was here thinking for the United States government, no doubt the military, was delighted with my pregnancy. He encouraged me in exercising to prepare for natural childbirth and read to me in hospital, as labor started, from Bertrand Russell’s autobiography. So delighted was he, that he convinced me to write home about the birth of my son. My mother wrote back that I was never to return to Wisconsin. I began crying and cried pretty steadily for a year. John, the Englishman, a topologist who had suffered from depression most of his life, did not thrive in these circumstances. Three years later we were splitting apart.

I don’t think he ever thought I loved him but rather that I had needed him and was taking advantage of his home to shelter my son. You see, he had grown up being told he was the intelligent son, his brother the good looking one. He graduated first from Marlborough, then King’s College, Cambridge. I thought he was very good looking. But, a time or two when we were going to the cinema and then dinner, he would say, People are going to wonder, How did that old man get that woman to go to dinner with him. He was thirty-four, I was twenty-eight. Also, because of his very specialized education, he felt alienated.

When he first noticed me and asked me out, he had seen me as a happy, integrated, young American woman who loved to dance.

That I did love him came home to me profoundly when years after we were no longer living together, and I was living with my son in a derelict building, one where the sky was visible in places through the ceiling, I found myself waking every night when the night watchman came to check the Royal Hospital for the Blind across the street. The watchman rattled his keys in exactly the way John had rattled his. John, I would wake up thinking, confused; then, Where am I? How did I get here?

Earlier on, John had told me that if I got a job and began supporting my son and myself, that he would give me half his income for a year. I had cried, thinking about how hard it would be to ever find such a good man again.

But job after job the Home Office made each of my employers let me go, saying to hire some English person. It was such a nightmare: there were times when I only had money to feed my son; those nights I would eat Dalmane so that I would sleep rather than feel the hunger. I looked great, being skinnier than I’d ever been, but I was so unhappy.

Then, I met a young barrister who arranged an adjudication hearing for me, prior to which I had access to my dossier. That is how I found John’s letters, one for each job I had told him about, each turning me in for working illegally. Even as I write this to you, nearly two decades later, I am shocked.

After that I was obsessed with the question of whether, when a man lied to a woman to sleep with her, and she agreed, it was rape.

Contributing to the question was a beautiful letter written by John, encouraging me to come to him: he had talked about how good for him it would be to have a baby in his home, to whom he could give awareness of Truth and Beauty, he and I together, teaching these essential things. Later he had broken in and stolen this letter and others in the series.

So, when you and Prince Charles were breaking up, I saw your insistence on basic truths to be quite heroic. How amazing, I thought, that she actually thinks he should have been true to her. But more than that, that she is sticking to what she believes.

More and more I saw you as the most influential young woman among women all over the world.

Remembering how I had felt in London, I could imagine how you felt, the sheer devastation of knowing your life has been taken and used without regard for your feelings. You were made the mother of important children, but the father did not cherish you as the mother of his children. Instead of warmth and happiness and a secure home, someone with whom you could share your most intimate memories and feelings, you were abandoned, though you had your children, children being a wonderful thing.

(At the time of your wedding, I was becoming unable to keep it together with my son because of the incredible pressure, the nuances of which I won’t go into, knowing you understand pressure. Shortly thereafter I thought that if I moved back here, I could organize my life so that I could more easily provide for him, and that I could then bring him here. But English Social Services, instead of keeping him in trust for me, gave him to people who wanted a child, saying that I hadn’t been a very good mother anyway, hardly providing for my son adequately, never mentioning that it had been illegal for me to work. All of which, most simply put, translates into intense, deep pain, for years, for me.)

Here, where it was legal for me to work, I soon was doing much better than I had done in England. Most recently I was a Realtor in Santa Fe. But then, in 1994, the Internal Revenue Service put me out of business, using wrong numbers, so that I am now fighting the IRS. (My experiences were such that U.S.News & World Report used some of them in “A Messy Business,” which they ran on April 8th.)

Also, I wrote a story, a book-length story, much of which is set in England. Though I’ve sent a synopsis to a million agents in New York, they’ve all rejected it. One agent, Jay Mandel, read it after I told her that Dean Koontz had written me saying my letter to him was “exceptional,” (he gets over ten thousand letters a year), and that Molly Stein at Viking had suggested, based on my mention of Mr. Koontz’s letter, that I get in contact with a few of her favorite agents, which was how I got her, Ms. Mandel’s, name and address. She liked my writing, but said my story was too unconventional.

Here’s what I want to know, would you read my story? I feel as if you might like it. I’ve got to tell you, though, I didn’t write it as if I were telling it to exceptional people, I wrote it to tell a story about ways of being. I put you into it, in a cameo appearance, because of how significant I think you are to women. I always wondered what you would think of that if you just happened onto it in passing. Now, if you read it, I hope that you will tell me.

Will you read it?

I hope that you write back and that you say that you’d like me to send you a copy of my manuscript. (There’s pretty much action in the story, so I don’t think you’d be bored reading it.)

So, now you see how bold this letter is.

The humbleness I felt while writing it, which was greater than I think comes across, came from knowing how well you have carried out your struggle and how poorly I have done with mine.

But, what I think, is that if really a lot of women read Go, the story I’ve written, if it were to become a published book, that it would help all of us, together, grow stronger.

Which reminds me to tell you that I don’t think I exactly thought of the story, rather it sort of came to me, day by day: I would pray that I would find what I needed for the story, then I would write what I found.

Sincerely, and with respect,

12/27/96  I hope that you have had some deep joy during the holiday season and that 1997 gives you things that are dear to your heart and that endure.

(It’s amazing how long it’s taken me to actually post this.)

You can see from the date at the top of my letter, when I began it, to the date at the end, that it took me a long time to write and post my letter. So, when I received a response from Princess Diana’s secretary in about three weeks, not counting time in the mail, I was pretty totally amazed. 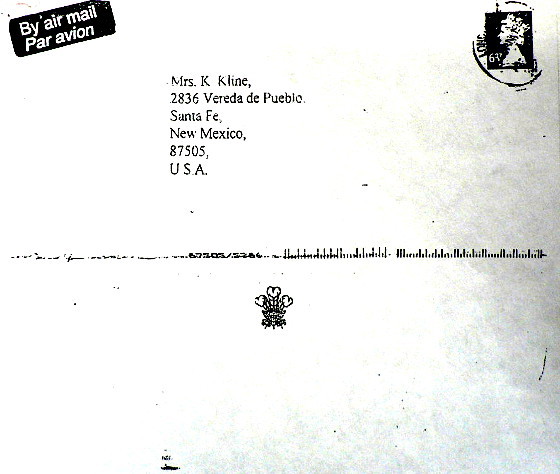 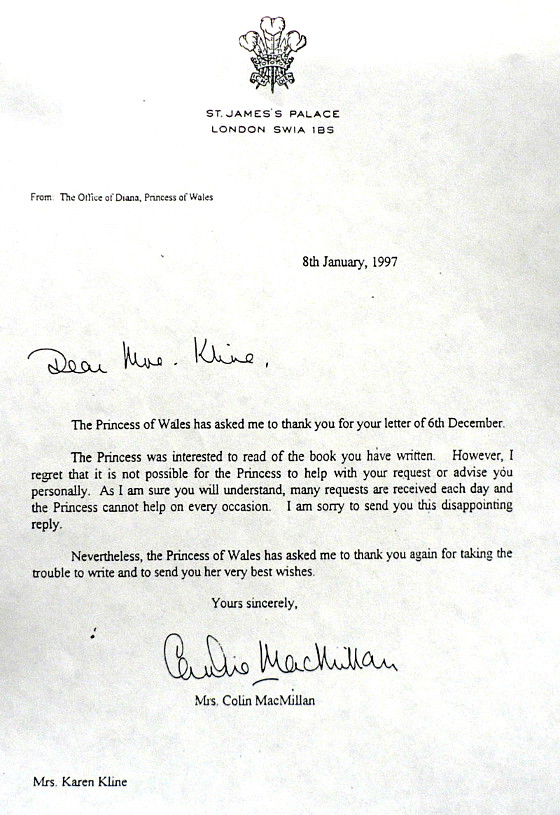 I have wondered ever since whether the Princess actually read my letter, held the paper that I had held and read the words that I had written.

I thought she might have because the answer came so quickly.

But then again, maybe I was flattering myself that she would read a letter from me.

9/28/2016 ~ Unlawful Killing: The Murder of Princess Diana is a careful documentary that’s worth watching if you’re interested in what the English Court decided re Princess Diana’s death.