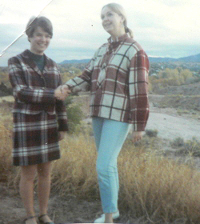 Maybe I was able to hitchhike all over the United States when I was young, because I wasn’t beautiful in a way that created a desperate desire to possess me.

The way I prefer to think of it, is that my idealism protected me. I’m the tall one in the picture, looking up into the sky and believing in all that’s beautiful and good.

It’s not to say I didn’t think about how I could get killed while hitchhiking. I thought about my chances of coming in contact with a psychopath who would kill me, and I decided my chances were pretty similar to those of flying to my destination and being in a plane crash.

Nevertheless beforeÂ I set out from Madison on my first adventure, I went to a priest’s home, since it was past the regular confession hours, and made my confession so that if I was killed, or died in an accident I would go straight to heaven.

I also went to aÂ showers area in some part of the university and had a shower and washed my hair. Without a towel I dried myself as best I could using the shower curtain. I loved the dim light, the warm water, the continuity of clean.

When Jay and I set out and I told him I had friends in Haight Ashbury, he was impressed. I, on the other hand, had never heard of Haight Ashbury. Jay, Me and a Dime ~ Read more.

One of my favorite memories is sleeping on a chair in a Haight Ashbury apartment. I slept covered with my quilted robe. It was so pretty: red and white in this tiny print of flowers and vines. In any case, I would wake up in the morning and find this Hells Angel standing near by, guarding me. I mean, really, isn’t that ever a lovely memory?

I suppose in part I was being guarded because I was a virgin, though I never mentioned it. I think it somehow showed in my idealism. I think there was a way in which I appreciated people without a sense of sex and the pleasure of passion.

I am reminded of the Mount Tamalpais Rock Festival where the Hells Angels were in charge of Lost Children. That was before I met the Hell’s Angel who would guard me.

I remember being hungry at the festival and wondering what I was going to do without money.

There was a stall where the Knights of Columbus were grilling and selling hamburgers. Basically, the festival was to raise money for a good cause, a children’s center.

To this end, I think it’s good to choose clothes that look good. Good in the true sense of the word.

There are times when clothes that look sexy are a better choice, for certain occasions, but generally, looking Good is the best choice. It can help create good memories. It can contribute to good experiences because looking good calls to mind our ideals.

Because of my many excellent and wonderful experiences I was unprepared for the opposite side of the coin, where people in power, authorities, have lost sight of ideals and do incredibly harmful things without seeing the good in you or the bad in their actions.