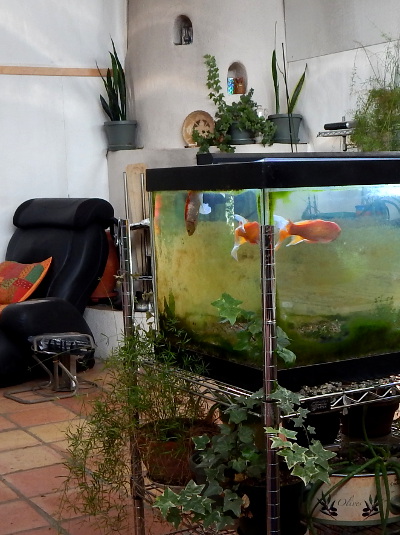 11/25/2015 ~ My female goldfish is hanging perpendicular in the tank because she has a swim bladder problem. SheÂ has always liked to dig in substrateÂ unlike the maleÂ whoÂ more often swam along the top and napped at the bottom comeÂ afternoon.

For years I didn’t have a filter. After I got a large aquarium, with plants, I seldom changed the water. So it’s no surprise my female goldfish has swim bladder problems which affect her balance. As you can see in the photo, when she wants to rest her head falls downward. That’s because her swim bladder raises her tail.

As long as she’s digging in the bottom, which she has always liked to do, she doesn’t seem to have much difficulty. But, when she wants to go from a digging position with her head down, to a horizontal swimming position, she has to struggle.

I’m appalled that she has this problem because I didn’t understand how the ammonia laden water was affecting her, when I wasn’t regularly changing the water. I wrongly thought that the plants would clean the water. When excessive ammonia was killing the plants, IÂ misinterpreted it as the plants not getting enoughÂ light.

I added API Stress Coat and API Enzymes, and that seemed to help. So, I added more. The Stress Coat, which has aloe in it, ended up putting a popcorn-ceiling like coating on everything. In distress I read hundreds of reviews on Amazon and Googled for more information.

Seachem Prime
It turns out that API Stress Coat is frowned upon by many long time fish owners. Most of them swore by SeaChem Prime. So I got SeaChem Prime. The popcorn coating went away within a day. But, my female goldfish was still having swim bladder problems, even a day after a water change.

I called SeaChem and learned that I could add Prime every other day. I immediately changed to the more frequent schedule and again there was improvement, but not a complete cure.

I ordered more plants, from a seller on Amazon who offers a selection for $25, includingÂ some I particularly wanted. They arrived in excellent condition and looked great in the aquarium. But, they soon looked less healthy, leading me to guess it’s too cold in here for them, given night temperatures in the 50s. (I have solar and heat with candles, so my home is not as warm as a home on public utilities.)

12/7/2015 ~ I ordered theÂ Finnex FugeRay Planted PlusÂ lightÂ because it has red as well as blue and white LEDS, and because reviews said it got hot and gave a lot of light. In the picture you can see the LEDs reflecting on the surface of the water.

You can also see the Peace River substrate I use.

When the lightÂ arrived I emailed Finnex to ask if I could put the light right on the glass top, instead of using the feet. AÂ tech responded saying that the feet are meant to raise the light so that the LEDs stay cooler, and thus last longer. But, he added, lots of people complain about how bright the light is and place it directly on the glass. So, I placed mine on the glass. Given that my living room is 63* now, and seldom warmer during the winter, I don’t think the light will get too hot.

I also got a thermometer for the aquarium, soÂ I now know that the lights (the Finnex, an Aqueon duo T5, and two small strip lights attached to the rim of the aquarium and immersed) raise the water temperature a little more than 2* above the temperature in the room. Thus, my aquarium water is 65* now, and retains most of that heat throughout the night.

The plants seem quite happy. However, I should add that I got SeaChem Potassium, Flourish, Flourish Excel, and Stability for them. Since all these improvements the plants have begun to pearl, that is grow and make oxygen which forms little bubbles on the leaves and stems that detach and rise to the surface like strings of pearls. Even with only the Finnex on, using only 20 watts, the plants pearl.

I changed out ten gallons of water every other day, always adding the array of SeaChem things.

So, when my female goldfish began laying on the bottom, which is not a good sign, I was major confused. I had expected her to get better.

My Goldfish Lying on the Bottom ~ Read more.