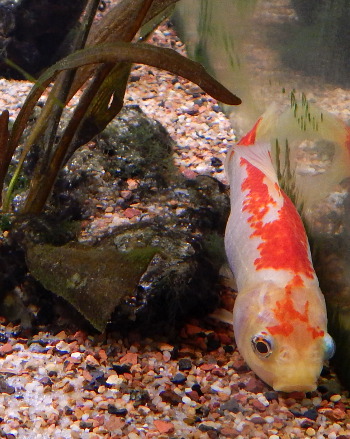 12/10/2015 ~ When I bought my goldfish in 2001, I thought goldfish were a species of colorful, tiny fish. I had no idea that what wereÂ being sold were babies. Because of my ignorance I kept them in a large punch bowl for years until someone on an aquarium forum called me out.

After I got them a larger tank, they grew, so I got a larger tank, and again they grew. Now they are in a 40 gallon breeder tank, which is the largest that will fit in my living room, so… I’m hoping they stay the size they are.

My female goldfish is lying on the bottom. She justÂ recovered from a swim bladder problem that caused her to hang perpendicular at the top of the tank, read more. I truly thought she was much healthier in every respect. But, apparently not.

I am appalled that my ignorance re goldfish has caused her serious health damage. I had heard that goldfish stay smaller in smaller tanks, so I thought that was “natural”. What I did not know, and this may not be true since I read it on the internet where it was published without substantiating research papers, is that while goldfish bodies stay small, their internal organs continue to grow.

Thus, a goldfish may have trouble digesting packaged goldfish food because the goldfish’sÂ intestines are cramped. When that happens a goldfish, particularly the ones with rounder bodies, tend to lie on the bottom of the tank. In the picture you can see how her tummy bulges out.

I had thought the bulge was entirely an enlarged swim bladder due to ammonia I was inadequately removing from the tank, but I changed water, added Prime, and things for the plants which are now actively growing and presumably changing ammonia to oxygen, given the strings of bubbles that are rising from the plants, and she’s still at the bottom.

Several goldfish sites and videos suggest adding Epsom salts to the tank, at the rate of a tablespoon per ten gallons. I’m not sure how often you can do that. Anyway, I added an Epsom salts solutionÂ and expected results in about 6 hours, but there was no improvement.

Another remedy repeatedly suggested was withholding food for 3 days. I began trying that, but after a day and a half I was too worried about them being hungry, and I put in nineÂ Wardley granules, which the goldfish snapped up.

Previously I was opening the lid and dropping the granules on top of the water. The fish gobble them with quite a noisy show of enthusiasm. But, I’ve now been alerted through reading on several sites, that if a fish takes in a lot of air with its food it can increase swim bladder problems. Based on this information I now drop the granules into the stream of water from the filter, which takes the granules into the waterÂ soÂ the fish can eat them withoutÂ taking in air.

To be honest, I was shocked to find my female goldfish lying on the bottom. I thought I’dÂ succeeded in “curing” her swim bladder problem that had her hanging, head down, at the surface of the water. After all, the plants were all pearling, which indicates they’re actively growing and converting ammonia to oxygen, the water was warmer due to theÂ new Finnex FugeRay Planted Plus and old Aqueon duo T5, which significantly raise the water temperature. By that I mean, about 2 degrees. So instead of the water being 60 degrees like my living room, it’s 62, even 65 on a warmer day. I had thought all was well. But, no.

I even began to wonder if she liked the swim bladder problem because it raised her tail and made it easier for her to dig on the bottom which is her favorite pass time. I began to wonder if she, like me, had some health problems that were preferable to others. For instance, at this point I’m grateful that I can walk with my walker. 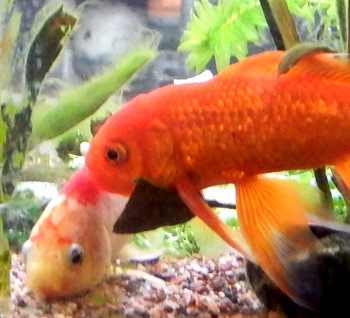 The male fish is clearly concerned about her. He lies by her side or “hangs out” near her when she’s not well. This is particularly true when she lies on the bottom and he can easily be by her. When she has swim bladder problems that cause her to be perpendicular he doesn’t try to be by her in that position. Instead he swims up to her as if he’s checking on her.

Despite the fact the male goldfish wouldn’t get any food if I was withholding food from the female, I decided to not put any food in for another day or two.

Last night I was worried that today she’d still be on the bottom and I would have to feed them anyway. But, Happiness! she’s swimming around today. The bulge is gone.

So, my next problem is cutting back the anacharis and finding a way to secure it to the bottom while the roots take hold, which is a lovely problem to be facing, as opposed to a sick goldfish. 🙂

It’s really exciting to see how much goldfish can recover! It’s exciting to me that I have recovered as much as I have from nerve damage I suffered from having low B12 levels. Happiness!

1/24/2016 ~ All was well until there was over a week of clouds and I ran down my solar batteries to below 70%. Doing that shortens their life, so I turned off the aquarium filter for a couple days. I thought it would be all right because I was changing out water every other day. I was wrong, however. My female goldfish got much worse, far worse than before.

After watching nearly all the videos on Curing Goldfish with Swim Bladder, I put 8 tablespoons of Epsom salt into the 40 gallon tank quite late one night when I couldn’t sleep for worrying about her. Next morning, no change.

The most hopeful video I watched was a fellow giving his goldfish an Epsom Salt bath. Despite the fact I didn’t have a net large enough for my goldfish I decided to try it because she was looking so unhappy. I was afraid she’d die because she’d give up. Plus, the swelling was so large it looked like it might be painful. Here’s myÂ video:

I’m surprised at how much better she is this morning. I’m going to change out some tank water and replace it with much warmer water so that after her bath she goes into a tank that is not so radically different in temperature.

Day 2 Treatment of Badly Impacted Goldfish, Swim Bladder, Popeye,Â and Bloating coming up. Hopefully it will be shorter now that I have the hang of giving my goldfish an Epsom Salt Bath.

Day 3 ~ My female goldfish appears to be getting better, day by day. The treatment is supposed to be for five days.

Day 4 ~ I’m still not sure this is going to work, but day by day I’m more hopeful.

Day 5 ~ The final day of the Epsom Salt Treatment

My goldfish totally recovered. She had some scales turn black, but in a couple of months that went away.

Before I tried the Epsom Salt Bath I put Epsom salt directly into the Aquarium. It did not help my goldfish at all. It did rather ruin the balance in my tank, though. I got HUGE amounts of rapidly growing hair algae. I was able to get rid of it by keeping the lights off for a few days.

But having the lights off meant the plants were not cycling the ammonia. Because I was worried about Wells Fargo’s foreclosure action on my home my thinking was divided and I failed to make up for the lack of plant cleaning action.

I didn’t see that the male goldfish has a lot of black scales, far more than the female. By the time I noticed he seemed quite sick and I couldn’t find anything on the internet to quickly do. He died a day later.

I’ve been desperately missing him. He was very beautiful. I always told the female she was beautiful because I didn’t want her to feel inferior. But in the end, I think the male felt unloved because he was sick and I didn’t give him the kind of attention and care I gave the female. One day I began saying to him how beautiful he was. He stopped swimming and came over to the side of the tank where I was. It was almost as if he wanted to hear me say he was beautiful, but at the same time he didn’t quite believe me, given how late it was in his life.

8/9/2016 ~ The female goldfish is impacted again. I have been feeding her only the sinking granules, and sparingly at that. The water has been nice and warm to aid digestion. So I’m not sure why she got sick again.

She spends a lot of time digging, so I don’t think she misses him as much as he would have missed her, since he appeared to be constantly aware of her, and lay next to her when she was sick.

I used to worry a lot about what I would do if she died. I didn’t see how I could find a goldfish female for him, to replace her.

Now that he’s died, I think of how he was always somewhat more fragile. But, she was the one who got dreadfully sick periodically. So I began to focus more on her, than on him. And, he died.