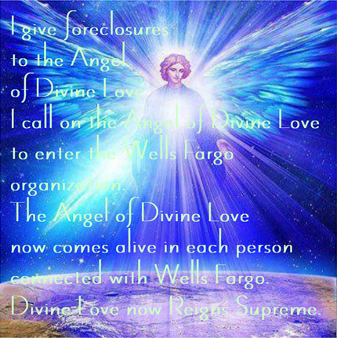 8/26/2014 ~ So, if people don’t think angels are real, and as a result won’t give foreclosures to them… The question arises, what is an Angel?

I turned to the American Heritage Dictionary, my favorite because it gives information on where words come from.

anÂ·gelÂ Â (Änî€ŸjÉ™l)Â n.
1.Â A typically benevolent celestial being that acts as an intermediary between heaven and earth, especially in Christianity, Judaism, Islam, and Zoroastrianism.
2.Â A representation of such a being, especially in Christianity, conventionally in the image of a human figure with a halo and wings.
3.Â angelsÂ ChristianityÂ The last of the nine orders of angels in medieval angelology. From the highest to the lowest in rank, the orders are: seraphim, cherubim, thrones, dominations or dominions, virtues, powers, principalities, archangels, and angels.
4.Â A guardian spirit or guiding influence.
5.Â a.Â A kind and lovable person.Â b.Â One who manifests goodness, purity, and selflessness.
6.Â A financial backer of an enterprise, especially a dramatic production or a political campaign.
[Middle EnglishÂ aungel, fromÂ Old EnglishÂ engelÂ orÂ Old FrenchÂ angele, both fromÂ Late Latin angelus, fromÂ Late GreekÂ angelos, fromÂ Greek, messenger.]
Â .
.
So, the Ancient Greeks hadÂ angels, as didÂ Christianity, Judaism, Islam, and Zoroastrianism. That’sÂ extensive.
.
In ZoroastrianismÂ ‘adorable ones’Â wereÂ spiritual beings or angels, worthy of being honored or praised. They personified abstract ideas and virtues, as well asÂ concrete objects of nature. These beings were ever trying to help people, and protect peopleÂ from evil.

I call on the Angel of Divine Love to enterÂ the Wells Fargo organization.

The back story and usefulÂ links ~

I am still in my home, years after Wells Fargo filed for Foreclosure because I did discovery and requested that Wells Fargo produce the Original Note, as per UCC requirements.

Please helpÂ raise awareness of foreclosuresÂ to help all Americans who are up against powerfulÂ banks that get away with fraud and dishonesty.

Image Credits ~I’ve lost the credits for this image