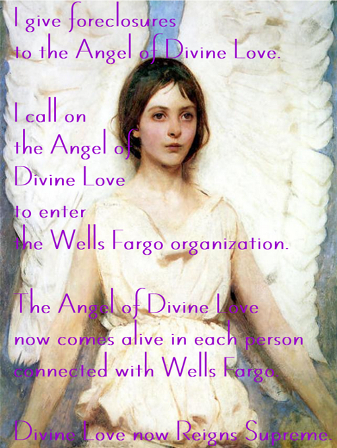 From September, 2008 when the economic collapse began until January, 2014, there have been 4.9 million completed foreclosures.

In 2013, Florida, Michigan, Texas, California and Georgia were the states with the highest number of foreclosures. On the opposite end of the spectrum, D.C., North Dakota, Hawaii, West Virginia, and Wyoming had the least.

On average 2.6 people live in an American home. Thus, 12.74M Americans hadÂ their homes taken from September, 2008 to January, 2014.Â (More than half of Americans own(ed) their homes.)

I call on the Angel of Divine Love to enterÂ the Wells Fargo organization.

The back story and usefulÂ links ~

I am still in my home, years after Wells Fargo filed for Foreclosure because I did discovery and requested that Wells Fargo produce the Original Note, as per UCC requirements.

I will keep fighting the foreclosure of my home because I love my garden. I can’t go places because I can’t walk very well, so my garden is the love of my life. I love the bees, wasps, praying mantis, lizard, ants, flowers, and veggies. I have the veggies in my meals every day, but most abundantlyÂ during the summer.

Please helpÂ raise awareness of foreclosuresÂ to help all Americans who are up against powerfulÂ banks that get away with fraud and dishonesty.